Every culture has a profound history that marks the very existence of it’s growth. It all represents the good, the bad and the ugly of it’s development. Some history is dark and scary to revisit, but helps those of us today stay humble and appreciative. Each race has it’s own distinct culture. However, once we all can group together and learn about each other’s history then can better understanding and growth begin. At the Epiphany school, this understanding is well on it’s way. The following is about the Facing History program and was written by Mr. Samuel Oladipo, Epiphany Teaching Fellow:

Facing History is an organization that uses innovative approaches to teach both Jewish History and the thought process and events that led up to the Holocaust. The organization continues to create dynamic projects intended on carrying on the conversation and engaging students across the nation. One such project is a collaborative effort between schools of differing demographics. Recently, Epiphany and The Rashi School embarked on a journey that intertwined students of Jewish ancestry with students of mostly African-American background.

The journey began in the fall of 2013, when Rashi School contacted Epiphany to begin a conversation about the possibility of this collaboration. In November, I met with Mr. Simon Epiphany’s Social Studies Department Head about the idea, and shortly thereafter, Epiphany decided to officially move forward with the initiative. The students began their journey with myself spearheading the partnership alongside Mrs. Abernethy, Ms. Reed, and Ms. Brice.

As we galvanized the student body and excitement brewed, 8th grade students were learning about the Jewish internment in reading and writing class and 7th grade students were in the midst of a Judaism unit in their religion class. The project’s theme was centered on the Jewish quote “If I am not for myself then who am I? If I am only for myself then who will be for me? If not now, when?” 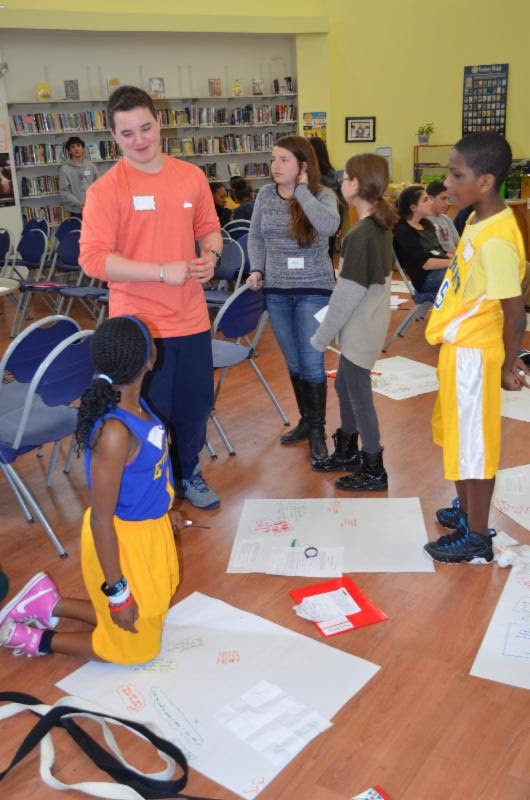 Epiphany and Rashi students working on a collaborative project in Epiphany’s Assembly Hall.

This quote, written by Rabbi Hillel is taught to every Jewish child as a part of their transition into adulthood. The quote also speaks to a larger subject of being an “upstander” or “bystander” and engaging young people in a social justice oriented conversation.

Currently, the seventeen 7th and 8th grade students taking part in this initiative are heading into the fourth of five group meetings, which alternate between the Rashi School and Epiphany School. Students have also been exposed to one another on varying levels. They have created and shared biopoems they wrote, brought in and shared objects to identify themselves, and participated in a human barometer activity which helped students understand how their peers (and they themselves) were responding to difficult subject matter. Students also have time to talk to each other and learn about their interests and experiences, with the idea that they will recognize what makes them similar and not focus only on their differences.

The last meeting will be held at Rashi School, where students will meet a real life hero and freedom rider, Paul Breines. In addition, in the next academic year Epiphany and Rashi will continue this journey with the hopes of expanding the project and incorporating larger student participation.